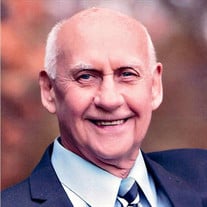 BOWEN – William D., “Bill,” 85, South Fork, entered into eternal peace December 22, 2019, at Windber Hospice. Born February 13, 1934, in South Fork, son of Earl and Marion (Bray) Bowen. Preceded in death by parents; wife, Margaret “Marge” (Concel) Bowen, who died March 15, 2017; sister, Carole Yeager; and in-laws, Clair Yeager, Mary Kolarawski, Kathryn Rindo, Ann Bulvin, and John, Michael and Andrew Colton. Survived by son, William R., married to Chris Wright, Powhatan, Virginia; daughters, Sharon, wife of Brian Wilson, Summerhill; and Connie, wife of Michael Kiser, Lancaster; grandchildren, Kevin (Kate) Wilson, Scott (Kristin) Wilson, Caitlin Bowen and Caley (Walter) Bowen and Michael and Lauren Kiser; great grandchildren, Kane, Huck, Penn, Caleb and Kolby Wilson; brother, Denny (Dorothy) Bowen, South Fork; in-laws, George (Carm) Colton, South Fork and Carl (Pati) Concel, Johnstown, and numerous nieces and nephews. Bill was a member of Wesley United Methodist Church, South Fork all his life and served faithfully as Usher, Trustees member, and served on many other committees in the church as needed. He was a graduate of Adams Township High School, class of 1952 and worked for Bethlehem Steel Corporation for 42 years. He loved his job and the great group of “guys” that he worked with. They were like family to him. Bill spent 2 years away for the military (1956-1958) after being newly married for 5 months. He was sent for training to Fort Knox, Kentucky, Fort Benning, Georgia & Fort Sill, Oklahoma. Bill had a personality that shined no matter what he was facing. He was always full of energy and had a real zest for life. He was a generous and kind man and he made friends everywhere he went. His family meant the world to him! He was also the one in “charge” of the remote control, flipping from one sporting event to another…and we can’t forget how he loved those Hallmark Movies that he and Marge watched together. Bill and Marge also traveled extensively, they loved going with friends or by themselves, enjoying the beautiful country. They enjoyed meeting new friends during their travels and have great memories with the folks from Happy Times and Lodestar Bus Tours. Honoring his wishes there will be no public visitation. A private service will be held at the convenience of the family at Charles O. Dimond Funeral Home, Inc., South Fork. Private interment, Richland Mausoleum where he will join his beloved wife of 61 years! The Bowen Family is very grateful for every kindness and the exceptional care and compassion extended to Bill particularly by his healthcare providers, nurses, doctors, Conemaugh Home Health Nurses (Katie and Jackie) and the Windber Hospice Angels that took special care of him (Jaymi, Heather, Naomi, Tracy, Helen, Kimberly and Jennifer). A great big “thank you” to his neighbors (Tom, Debbie, Gary, Paula, Cameron & Kathryn) and all of those that sent cards and made weekly phone calls to check on him.

The family of William D. Bowen created this Life Tributes page to make it easy to share your memories.

Send flowers to the Bowen family.