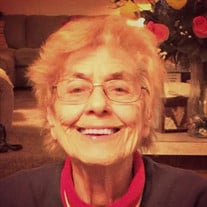 SHULTZ – Verla Mae (Graham), Ebensburg, formerly of New Germany, died June 12, 2018, at UPMC Altoona. Born in Vintondale, daughter of Sadie (Mitchell) and Mahlon Graham. Preceded in death by parents; husband, Richard; brother, Bob; sister, Kay Williamson; sister-in-law, Linda Graham; and nephew, Michael Shultz, whom she raised. Survived by children, Linda, wife of Jeff Careatti, Goodyear, Arizona; and Ken, married to Dusty (Costlow), Maple City, Michigan; grandchildren, Richard Emerson, Enola; Brian Emerson, married to Tesia (Oblinsky), Newport; Scott Emerson, married to Michelle (Cameron), Vinco; Ken Shultz Jr; and April Shultz, Maple City, Michigan; great grandchildren, Jordan, Ty, Dawson and Cameron Emerson; William and Wyatt Shultz; and brother, Bill Graham, Shreve, Ohio. Verla Mae earned a Bachelor’s Degree in Health Care Administration and was a retired LPN and RN from Lee Hospital with 25 years of service. She performed insurance physicals for various insurance companies before becoming a licensed insurance agent. She was self-employed with the GBU Fraternal Insurance Co. of Pittsburgh since 1980 and attained a FICF rating. She won many awards and was a member of the million dollar club. Also awarded the Louis Voltz Founder’s Award, the highest honor in the company; Fraternalist of the Year; Highest Producer of the year in 2014, 2015 and 2017; and Fraternalist of the year for the Pennsylvania Fraternal Alliance. She also served as the Fraternal Secretary/Treasurer for the local GBU District # 291, Summerhill. Representative for Lilly GBU District # 500, served as Secretary for the Summerhill Social Club and attended numerous GBU National Conventions. Life member of the American Legion Auxiliary, since joining as a Junior member in 1950 in Ohio. She was a member of South Fork Unit #653 where she was Treasurer and held numerous offices and served as President for many years. She served Cambria County Council of the Auxiliary as President and other offices. Served the Department of PA as District President, Western Vice President, Department Vice President, Department President in 1997-1998 and served the National Organization as the Eastern National Vice President. She served on the Board of Directors for the Homeless Veterans Program of the American Legion and instituted and ran a program for Keystone Girls State for 13 years. She attended every State and National convention of the American Legion from 1972 thru 2017. Also a member of the 8 & 40 and a Life member of the VFW. In the community she served on the committee to raise money to build the South Fork Senior Center, volunteered at several nursing homes, the Hollidaysburg Veterans Home and at the National Flood Museum in St. Michael. She enjoyed working and serving many weddings and other events at the New Germany Grove Hall and was a Notary Public for many years. Verla Mae loved volunteer work and enjoyed crafts, bingo, cruises and spending time with family and friends. In other words, she loved sharing her life with people. Friends will be received from 2 to 4 and 6 to 8 p.m. Friday at Charles O. Dimond Funeral Home, Inc., South Fork, where the American Legion Ladies Auxiliary Post 653 will have a service. Viewing will also be held at South Fork First United Methodist Church from 10 a.m. until time of service at 11 a.m. Saturday, the Reverend Terry Trudgen officiating. www.DimondFuneralHome.com

The family of Verla Mae Shultz created this Life Tributes page to make it easy to share your memories.

Send flowers to the Shultz family.