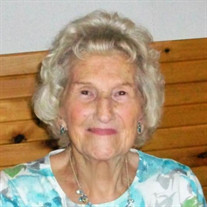 SMAY - Merna Fay, 98, formerly of St. Michael, left this world January 20, 2020, to meet her Lord and Savior. Born August 4, 1921, in Salix, daughter of George and Catherine Civilla (Knavel) Wingard. Preceded in death by parents; husband, Curtis Doyle Smay, who died January 31, 2001; three-month-old daughter, Rhonda Ardean; brothers, Charles, Clifford, Algie, Guy, and Ivan; and sisters, Marcel, Zelda and Nina. Survived by her three children, Kimmey L., married to Elizabeth A. (Rogers), South Fork; Penny, wife of Robert Myers, Sidman; and Nileleen, wife of Michael Tokarcik, Salix; brother, Nile Wingard, Sidman; six grandchildren, Elizabeth A. Burkhart (Mark), Curtis Smay (Diane,deceased), Alan Myers, Brant Tokarcik, Amber Tokarcik, and Robin Bartlett (Stacy); eleven great-grandchildren, and five great great-grandchildren. Merna was a lifetime member of Maple Grove Church of The Brethren where she taught Sunday school and was president of and cooked numerous meals for the church hall. Merna was very active all her life. She organized a club for 10 to 13-year-old girls, a Womans Club, and many bus trips. Charter member and former president of the St. Michael Ladies Firemans Auxiliary, which she established on August 4, 1971. Merna always took great pride in The St. Michael Fire Hall. Member since 1972 and past president and director of the Cambria County Firemans Ladies Auxiliary. She volunteered at the Miners museum and the 1889 Flood Memorial Club House; where she was also secretary. Worked at Grants store and then Bestform for 28 years, all while selling Raleigh Products and hosting Toy Lady and Dutchmaid Parties in the evenings. Member of the International Ladies Garment Workers Union and was shop stewardess. She worked on the Election Board in Sidman for 18 years and campaigned for John Haluska, John Murtha, and Mark Singel. She received an Excellence Award in 2015, presented by Tom Chernisky. Wrote the St. Michael News for the Portage Dispatch. Did much cooking, donated time, food and loved writing skits and plays for the church and firehall. Also, in her husband’s later years, she helped him with the Fish Nursery. Merna loved her family, friends, and community. She donated countless homemade pies and loaves of bread to many worthy causes. She poured her heart into every task and only begrudgingly sat still when she broke her hips. She will be sadly missed by all who knew her… to which someone joked, "Who doesn't know Merna?" Friends will be received from 2 to 8 p.m. Thursday at Charles O. Dimond Funeral Home, Inc., 621 Maple Street, South Fork. Visitation at the church from 10 a.m. until time of service at 11 a.m. Friday at Maple Grove Church of the Brethren, 130 Palestine Road, Salix; the Reverend Michael Christine presiding. Interment, Forest Lawn Cemetery, Johnstown. The family wishes to express their heartfelt gratitude to Doreen Torres for the kindness, comfort, and care she gave Merna. As an expression of sympathy please consider memorial donations to Adams Township Volunteer Fire Company #2 or Maple Grove Church of the Brethren.

The family of Merna F. Smay created this Life Tributes page to make it easy to share your memories.

Send flowers to the Smay family.