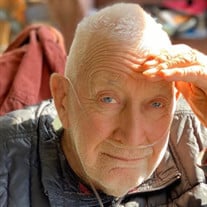 EVANS – John R. “Ronnie,” 83, Ebensburg, passed away peacefully May 17, 2021 at home, surrounded by loving family. Born March 29, 1938, in South Fork, son of John I. and Iva Pearl (Miller) Evans. Preceded in death by parents; wife, Mary Jane (Conrad) Evans, who died March 17, 2020; son Francis; and sister, Ruth Pileski. Survived by children, William J., Dunlo; Brenda, wife of Gary Pavlosky, New Germany; Mary, wife of John Brown, Ebensburg; Ronald J., married to Lisa (Partsch), Ebensburg; and Cary L., married to Billie Jo (Patterson), Ebensburg; 17 grandchildren; 11 great-grandchildren; an expected great grandson; sisters, Betty Maskal, South Fork; and Donna Voisin, Louisiana; brother, Clyde, Mineral Point; and numerous nieces and nephews. Ron was a member of Immaculate Conception Catholic Church, New Germany. He was an all-American farmer. He spent his life in the dairy and beef industry, pouring his heart and soul into the land he loved. His hard work and determination were an inspiration to many. He was a man who never raised his voice, a man who never gave up, a man with a heart of gold. Ron courageously endured the debilitating effects of dementia in recent years, yet it always brought him great joy seeing his children, grandchildren, and great-grandchildren follow in his footsteps on the farm. Though our hearts are broken God has called his farmer home. We find comfort knowing he has rejoined his loving bride Mary Jane, son Francis, and all those who went before him and whom he has longed to see again. Friends will be received from 2 to 4 and 6 to 8 p.m. Thursday at Charles O. Dimond Funeral Home, Inc., South Fork. Visitation at the church from 10 a.m. until time of Funeral Mass at 11 a.m. Friday at Immaculate Conception Catholic Church, Father Joseph C. Nale, Celebrant. Committal, St. Marys Cemetery, New Germany. www.DimondFuneralHome.com

The family of John R. "Ronnie" Evans created this Life Tributes page to make it easy to share your memories.

Send flowers to the Evans family.