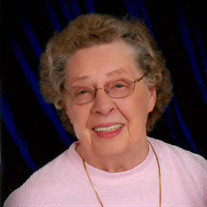 Montag - Joan D., 89, Johnstown, died February 4, 2022, at Arbutus Park Manor. Born September 9, 1932, in Johnstown; daughter of Vincent and Marie (Berg) Witherow. Preceded in death by parents; husband, Bernard W. “Duke” Montag Sr., who died December 20, 2003; infant brother, James; and brother, Paul Witherow. Survived by children, Janet, wife of James Kyler, Sheffield; Bernard Jr. “Bernie,” married to Denise Markum, Johnstown; Kathy Montag, Enola; Peggy, wife of Kenneth Liebel, Erie; Michael, married to Amy Nagle, Windber; and David, Johnstown; twelve grandchildren; and six great grandchildren; brothers, Vincent and wife, Virginia, Pine Grove; Richard, Troutville, Virginia; Robert, Harrisonburg, Virginia; and Ronnie and wife, Jane, Staunton, Virginia; and numerous nieces and nephews. Retired caseworker with the Pennsylvania Department of Human Services. Joan was a long-time member of Saint Gregory's Roman Catholic Church. She was a Religious Education Instructor and active in the Altar and Rosary Society. For many years, she served as the cashier for the lenten fish frys. She was a long-time member of the Solomon Run Ladies Auxiliary, holding many offices. Joan also participated in the Cambria County Firemen's Auxiliary activities representing Solomon Run Ladies Auxiliary. Joan was always seen Monday mornings baking the world-famous gobs for the Auxiliary……also noted for making her coworkers laugh. Joan was part of the election board at Solomon Run for many years; which was perfect for her love of talking to everyone and learning about others spreading humor wherever she went. Some of her passions in life were being an avid Steeler fan, beach vacations with her family, gardening and canning, going to the hunting camp in Emporium, and watching the deer in her yard. Joan was always glad to see her children and grandchildren, making sure the cookie jar was full. Her family was the constant recipient of her counsel and support. She loved having big dinners with everyone at the table because there was always more than enough food. Joan was selfless in her love for others and was always willing to help anyone. Friends will be received from 3 to 8 p.m. Monday, February 7, 2022, at Charles O. Dimond Funeral Home, Inc., South Fork. Funeral Mass will be celebrated at 10 a.m. Tuesday, February 8, 2022, at St. Gregory Catholic Church, Father Callistus Elue, celebrant. Committal, St. Michael Catholic Cemetery.

The family of Joan D. Montag created this Life Tributes page to make it easy to share your memories.

Send flowers to the Montag family.