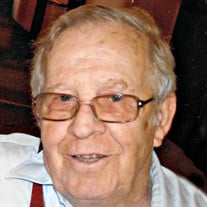 WILSON – Glenn N., 91, formerly of Summerhill, died July 6, 2016 at Arbutus Park Manor, Richland. Born Oct. 24, 1924 in Croyle Township, son of Arthur C. and Clara (Funk) Wilson. Preceded in death by parents; beloved wife, Evelyn (Mareck) Wilson, who died June 10, 2013; sisters, Leoda Custer, Zelva Angus and Rhoda Prostejovsky; and brothers, Dean, Merle and David Wilson. Survived by daughters Glenna, wife of Robert Ditchcreek, Nanty Glo; and Joan, wife of George Shiley, Raleigh, NC; and son Donald, married to Dawn Jones, Coatesville; eight grandchildren and eight great-grandchildren; brother, Clair Wilson, Arbutus Park Manor; sister-in-law, Virginia Wilson, Sidman; and numerous nieces and nephews. Glenn was a US Army veteran of WWII. He was a member of St. Paul’s Lutheran Church, Mundy’s Corner. He had a natural born ability to fix most anything he could get his hands on. These skills led him to several jobs as an expert repairman. He worked for Sani-Dairy, Gearharts, ran his own appliance repair business, and retired from Bethlehem Steel Corporation after more than 20 years of service. Glenn loved and enjoyed so many things. He was an avid gardener and enjoyed sharing his crop with friends and neighbors. Dad was so proud of his family and happiest when he saw his children and grandchildren reach their accomplishments and find joy in their lives. Besides his family his proudest legacy might be “Pap Pap’s Camp” which he built with his son, sons-in-law and friends in Sinnamahoning. He enjoyed many days there hunting, fishing and relaxing with family and friends. He defined goodness, always had a pleasant smile and will forever be in our hearts. Friends will be received from 4 to 8 p.m. Saturday at Charles O. Dimond Funeral Home, Inc., South Fork. Viewing will also be held at St. Paul’s Lutheran Church from 11 a.m. until time of funeral service at noon Sunday, the Rev. Kevin McNamara officiating. Interment, Ogden Cemetery. Military Graveside service by St. Michael American Legion Post 551. All are welcome to attend a luncheon which will be served in the church fellowship hall immediately following the graveside service. www.DimondFuneralHome.com

The family of Glenn N. Wilson created this Life Tributes page to make it easy to share your memories.