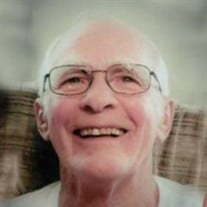 HOFFMAN - Dennis Arden, 74, of Benwood, WV., died Saturday December 1, 2018 at home surrounded by his family. He was born September 23, 1944 in St. Michael, PA., the son of the late Marlin G. and Florence M. Hoffman. Surviving are his wife,... View Obituary & Service Information

The family of Dennis A. Hoffman created this Life Tributes page to make it easy to share your memories.

Send flowers to the Hoffman family.