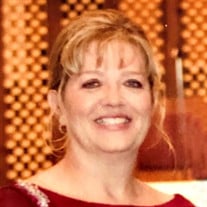 BODENSCHATZ – Christine M., 63, New Germany, died June 22, 2019, at home. Born July 16, 1955, in Johnstown, daughter of the late Cletus and La Verne (Lenz) Smith. Survived by loving husband of 43 years, Gary L. Bodenschatz, whom she married September 13, 1975; children, Steven, married to Rene (Davenport), Lancaster; Erin, wife of Scott Becquet, Ebensburg; Greg, married to Beth (Theys), Bobby, married to Rebecca (Stoehr); and Doug, married to Alyssa (Bishop), all of New Germany; fifteen beloved grandchildren; and sister to, Bonnie Smith, Tuscon, Arizona; Joseph, married to Janet (Bopp), Ebensburg; Pamela Smith, North Carolina; Terry, married to Linda (Dell), New Germany; Scott, married to Irma (Eckenrode), New Germany; and Shellie Montgomery, Prescott Valley, Arizona. Chris was a graduate of Bishop Carroll High School, class of 1973. Member of Immaculate Conception Catholic Church and their Altar Rosary Society. As a devout Catholic, Chris sought strength and guidance through prayer; with special devotions offered to the Blessed Virgin Mary and Saint Therese. Nothing made her happier than spending time with her grandchildren. Chris was also a talented seamstress. She had a lot of practice in the early years repairing holes in jeans for her five children. Celebrations and family gatherings, both at home and at camp, were always made special by her gift to prepare wonderful meals. She had a huge extended family, including the “cabin boys,” and always talked fondly of the times she fed half of the neighborhood. She enjoyed canning produce from the garden; as the number of empty jars grew in the spring, she worried that she had too many. In the fall, she wondered if there were enough. She instilled in us that faith in the Lord is the greatest foundation you can have; and being happy and having love fill your heart is what truly matters. Friends will be received from 2 to 8 p.m. Monday and from 9 to 10:15 a.m. Tuesday at Charles O. Dimond Funeral Home, Inc., South Fork, where the Rosary will be prayed at 2 p.m. Monday. Funeral Mass will be celebrated at 11 a.m. Tuesday at Immaculate Conception Catholic Church, New Germany; Celebrant, Father Leon Hont, OSB. Committal, St. Marys Cemetery, New Germany. As an expression of sympathy please consider memorial donations to Bishop Carroll High School, Ebensburg or Birthright, Johnstown. www.DimondFuneralHome.com

The family of Christine M. Bodenschatz created this Life Tributes page to make it easy to share your memories.

Send flowers to the Bodenschatz family.