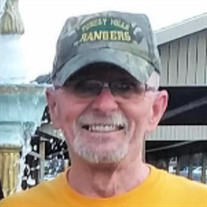 COUTTS – Robert Eugene “Bob,” 75, St. Michael, passed away peacefully June 7, 2021, at home surrounded by loving family after a four-year battle with Uveal Melanoma, a cause which he “championed” till the end. Born July 16, 1945, in Johnstown, son of George Vaugh Sr. and Dorothy Irene (Gindlesperger) Coutts. Preceded in death by parents; brother, George V. Coutts Jr.; and sisters, Barbara Hoffman, Carol Pauley and Peggy Poling. Survived by loving wife of 48 years, Denise Maxine (Glacken) Coutts, whom he married February 3, 1973; son, Chris, married to Czarina (Delatorre), Carlisle; daughter, Joy, engaged to Scott Croyle, Ehrenfeld; beloved grandchildren, James, Kierra, Ian, Denver, Makara, Laiken, Natalie, and Nathan; sister, Doris Wright, Lancaster; and brothers, Richard (Shirley), Gettysburg; and Gary, Moxham. Bob was a graduate of Adams-Summerhill High School, class of 1963 and a US Navy Veteran of the Vietnam War. He was employed at Bethlehem Mine 33 for 23 years until they closed. Bob was a warm presence behind the bar at Morris’ Tavern for more than 25 years. He was known not only for his drink mixing skills, but friendly personality making any time spent sitting on a stool in front of him memorable. He loved talking to everyone that came through the door. His favorite morning routine was his special talks with his boss and dear friend Kim Morris – Golias. Member of St. Michael American Legion Post 551 and St. Michael Sportsman Club. He was a fan of the Steelers and Pirates, but mostly his hometown Forest Hills Rangers Football Team. An avid sportsman, he loved hunting, but especially cherished camping and fishing at his “happy place,” along the banks of the Juniata with family and friends. Friends will be received from 6 to 8 p.m. Wednesday June 9, 2021 and from 9 a.m. until time of service at 11 a.m. Thursday June 10, 2021 at Charles O. Dimond Funeral Home, Inc., South Fork, his son, Pastor Chris Coutts presiding. Military rites by St. Michael American Legion. He was a wonderful husband, Dad, and Pap. He will be loved and missed forever. The family wishes to thank the staff of Hillman Cancer Center, UPMC Shadyside, and Winder Hospice for their kind and compassionate care.

The family of Bob E. Coutts created this Life Tributes page to make it easy to share your memories.

Send flowers to the Coutts family.